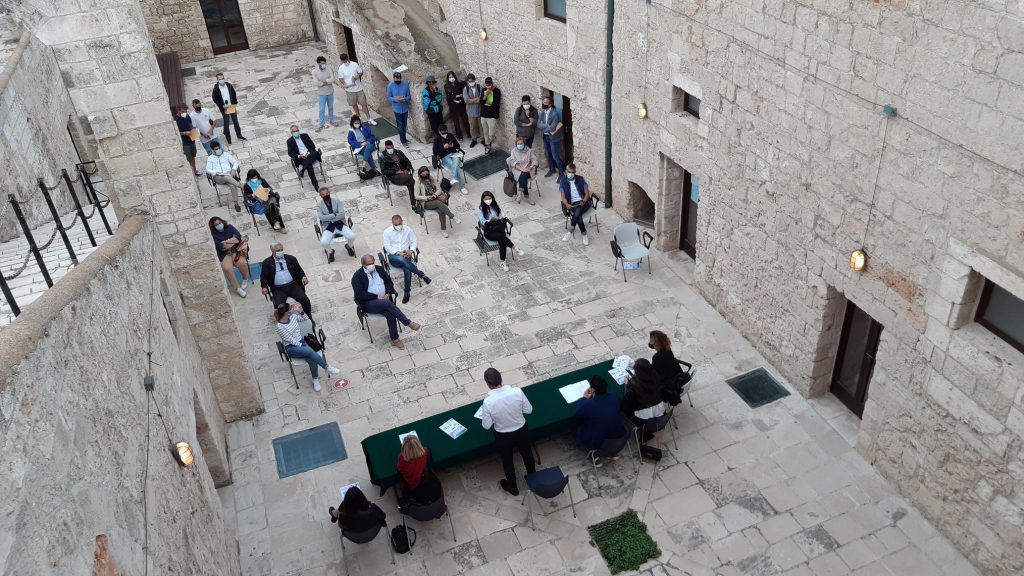 Presenting the programme of events scheduled until December

The Mayor of Monopoli, Angelo Annese, the Councillor for Tourism, Cristian Iaia and the Councillor for Culture, Rosanna Perricci, presented the events planned until the end of the year at a press conference. Music, theatre, shows and exhibitions in new venues that permit compliance with anti-covid regulations.

LUMOS – Curated by the Association La Nuova Portavecchia and Otm (Monopoli Tourism Operators), “Lumos-Colori d’estate” is a two-day event, on June 19th and 20th, with music, art and various events in the moat of Via Mulini. Throughout the summer there will be an ongoing art exhibition also with the presence of emerging artists, whose art is based on the revaluation of abandoned or disused materials.

PROSPERO FEST – SUMMER- After the success of the first two editions, “Prospero Fest” returns from June 12th to 18th. Debates, cultural entertainment, theatre pieces, concerts, contemporary art exhibitions by names of national renown. The detailed programme will be announced at a dedicated press conference on May 24th.

PROSPERO FEST – AUTUMN – The autumn version will be held from November 10th to 12th. On November 11th an appointment with “De Vinea, the tale of wine”, just as the jurist Prospero Rendella did in his treatise from which the initiative takes its name. Not a scientific approach but a narration of the Apulian oenological excellence associated with the beauty of the city that hosts the event.

FESTIVAL RITRATTI – The 17th edition of the Ritratti Festival organised by the Associazione Musicale Euterpe, will take place from June 21st to 23rd and from August 1st to 5th, in Chiostro di San Martino.

COSTA DEI TRULLI FESTIVAL – Music, culture, art and reading. The Costa dei Trulli Festival embraces and involves all the arts, attracting internationally renowned artists to Puglia. A festival that in addition to being a high-level artistic proposal aims to enhance the beauty and culture of the places that host it, creating a further opportunity to attract tourists. The participating artists will be announced at a later date during a dedicated press conference.

THE “GOZZO” PRIZE – CITY OF MONOPOLI – Puglia is also surprising for its variety of talents and professionals that operate in the region and beyond who allow the region to stand out in different fields. For this reason, in the heart of Apulia, in Monopoli, on Friday July 16th at 8.30 p.m., Cala Batteria will host the 16th edition of the “Il Gozzo Prize – City of Monopoli”, aired by the tv channel Canale 7 for those who have distinguished themselves in the fields of culture, entertainment and entrepreneurship at national and international level. In addition to these categories, there is an award for young talents and a special prize from the city.

PHEST – For the sixth year running, PhEST – See Beyond the Sea, an international festival of photography and art, returns to animate the centre of Monopoli, Puglia and the Mediterranean, and from here turns its gaze to the whole world. Once again this year the Festival has received the support and patronage of numerous institutional bodies, starting with the Department of Tourism and Cultural Industry of the Region of Puglia and the Municipality of Monopoli. What’s proposed from August 6th to November 1st by artistic director Giovanni Troilo and photographic curator Arianna Rinaldo, is once again a totally outdoor formula in full compliance with current regulations on safety and social distancing. The idea, therefore, for the summer of 2021 is to bring the museum among the people. The exhibition spaces are no longer thought of as walls on which to display images, but as environments in which the setting becomes part of the work itself. The central theme of this year’s edition: the body.

LAMATEATRO – From July to September eight evenings of Lamateatro Festival and four days of Lamateatro Educational also aimed at first and second grade schools. Shows, training meetings, workshops and participatory experiences held by professionals in the sector by L’Allegra Brigata. A theatre festival, without distinctions between genres and generations, in the name of contamination not only of languages, but also of audiences, to overcome unnecessary distinctions together and bring this living art closer to the community.

SUDESTIVAL – After the August preview, Sudestival returns with a series of events and screenings from October 29th to November 7th.

APRITE LE FINESTRE – Monopoli pays tribute to Franca Raimondi, the Monopoli singer who won the 1956 Sanremo Festival with the song “Aprite le finestre”.  It’s the title of the song that gives the name to the event promoted by the “Quadrosfera” Association of Pietro Brescia. The main squares of the city will be decorated with floral compositions, while a picture of Franca Raimondi will be on display in Piazza Vittorio Emanuele, but the surprises don’t end there.

STUDIO AZZURRO EXHIBITION – At the end of June, the Pino Pascali Foundation will host an exhibition of Studio Azzurro artists in the former barracks area.

GOZZOVIGLIANDO – Free excursions on gozzo boats (skiffs), arts and crafts markets, music, dancing, folk songs, culinary workshops, activities and workshops for children. These are the activities that will take place in Monopoli during the four Sundays of October as part of the initiative “Sulle vie del mare” promoted during the month of October in order to enhance the maritime traditions of Monopoli and contribute to the dissemination of historical and cultural aspects related to its port. The Palio dei Gozzi (Palio of the Gozzos) returns to the old port.

CHRISTMAS – The events for Christmas 2021 are already being planned, starting on December 1st 2021 running until January 6th 2022.

“Chiesa dello Spirito Santo”, Programm... The crypt of the Spirito Santo is one of Monopoli's must see sites. It’s an extraordinary example of hypogeum rock architecture that testifies to the carving skills of local workers, experts in quarrying. The era of its construction is doubtful and could be around the 12th-13th centuries AD: however despite its very ancient origins, the church is s...
Infopoint: Winter opening hours from 3 November With the closing of the summer season, the new opening hours of the Monopoli infopoints commence from Wednesday 3 November. The Largo Stazione infopoint will be open on Saturdays and Sundays from 9:30 to 12:30, while the Infopoint in Piazza Garibaldi n.24, at the Sala dei Pescatori, will open to the public every day from 10:00 to 13:00.
Costa dei Trulli Festival: Gigi D’Alessio an... Costa dei Trulli Festival: Gigi D'Alessio and Annalisa in Monopoli The concerts will be held on July 26th and 27th 2021 in the former fuel depot area in via Arenazza  Councillor for Tourism, Cristian Iaia and Councillor for Culture, Rosanna Perricci, communicate that the Municipal Council of Monopoli has approved the notice of address for the...
PhEST 2022 – first advances PhEst – See Beyond the Sea, once again finds great success among those, who for study, hobby and work, have an interest in photography and art. This International Festival of photography and art takes place in Monopoli, starting from September 9 to November 1°. Conceived and overseen by Giovanni Troilo, in collaboration with curator Arianna R...