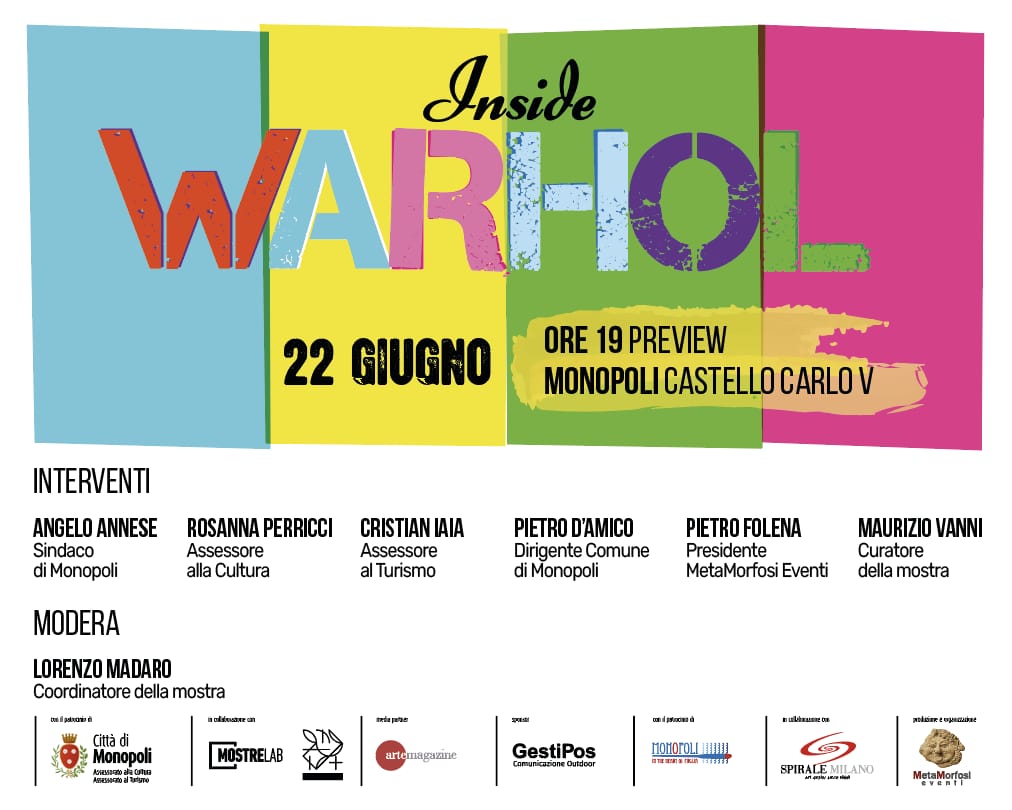 “Inside Andy Warhol” is coming!  An Apulian that holds an amazing history, is going to host a selection of original artworks, by one of the noble founders of contemporary art, and supported by video material, to offer a complete picture of Andy Warhol’s life and works (Pittsburgh, 6 August 1928 – New York, 22 February 1987).

It is all about identity: as relevant as ever due to its many contemporary adaptations. The exhibition, edited by historian and art critic, Maurizio Vanni, and coordinated by curator and art critic, Lorenzo Madaro, will open on June 22 on the noble floor of the Charles V Castle in Monopoli.

Created and arranged by MetaMorfosi Eventi in collaboration with MostreLab and Wall Drawings, and with the sponsorship of the Municipality of Monopoly, the exhibition counts numerous originals by Andy Warhol, including his Campbell Soups, Marilyns, Maos as well as some videos starring the artist.

The aim of the exhibition – open until 31/08/2022 – is to look beyond his artwork and into Warhol’s way of thinking, moods and inner level of commitment that influenced his creations.

“A fabulous journey,” Maurizio Vanni explains “represented by 33 of his works that made him famous, thanks to a peculiar way of communicating. How much truthfulness and fiction is there in his works and statements? What is the role of the “masks” he loved to play with, matching the different steps of his professional journey?”

On one hand, his troubled childhood and adolescence: his shyness and difficulties in communicating, together with his unpleasant physical traits, mostly due to his poor health, caused him to be ostracized by his school mates and family; On the other hand, his abilities in drawing, his natural sense of aesthetics and the powerful desire of innovation combined with the ambition of being a star system artist.

Besides four iconic Marilyns from 1967, the exhibition includes less famous and publicly shown artwork, such as the two Cataloupes from 1979 and a self-portrait of the artist, a silk-screen printing on paper from 1977. Eye catching also are two silk-screen prints on paper of a young Miguel Bosè from 1983. Moreover, his eclectic artistic genius is testified by the original covers created for John Cale and The Rolling Stones’ LPs in 1981 and 1982.

“His artistic choices, technical experiments, portrayed people and objects”, the exhibition’s curator explains, “meant way more than his words. Warhol guessed, before many others, what the American Sixties were meant to become: a universal microcosm that would have represented the events around the whole world.”

“Monopoli is proud to host some meaningful Andy Warhol’s works, in order to delight both citizens and tourists, of multiple generations, with his brilliant art.”, says Monopoli’s mayor.

“This exhibition is an opportunity to be among the Italian cities that host important art shows. Thirty-five years after his death, Warhol’s visionary thought comes to life again through his extraordinary works, which come from from private collections. A huge heritage, from an eccentric artist, that changed the history of art.”, says Rosanna Perricci, Monopoli’s Cultural Assessor.

“The works of Warhol exhibition is both a valuable cultural event and a smart way to enhance the cultural places of the city, in order to promote Monopoli on national and international territory and to attract tourism.”, affirms Cristian Iaia, Monopoli’s Tourism Assessor.

Ritratti Festival 2021 Monopoli resonates with the Ritratti Festival, XVII edition, a Festival that since 2005 has been bringinging music in the some of the most beautifil venues in Apulian Region. Starting on sunday, August 1, is the second part of 2021 scheduled program, with a new section called «Cineritratti». The musical kermesse will lead into a journey back to 19...
PhEST 2022 – first advances PhEst – See Beyond the Sea, once again finds great success among those, who for study, hobby and work, have an interest in photography and art. This International Festival of photography and art takes place in Monopoli, starting from September 9 to November 1°. Conceived and overseen by Giovanni Troilo, in collaboration with curator Arianna R...
Six Churches Open for Tourist and Cultural Purpose... Six Churches Open for Tourist and Cultural Purposes From 5 pm to 9 pm (10 pm for Basilica Cathedral) until 30 September 2021  On the initiative of the Town Councillor of Culture, Rosanna Perricci, and the Tourism Town Councillor, Cristian Iaia, once again this year, thanks to the success of the public registered over the years, 6 Monopoli chu...
Luggage Service at Infopoints The luggage storage service at our Infopoints is now active, enabling you to comfortably visit the city without the obstruction of your bags. You can request it in advance or on the spot, from the usebounce.com website, indicating the city of Monopoli in the search bar, the number of suitcases and the day you intend to use the service. The cost ...