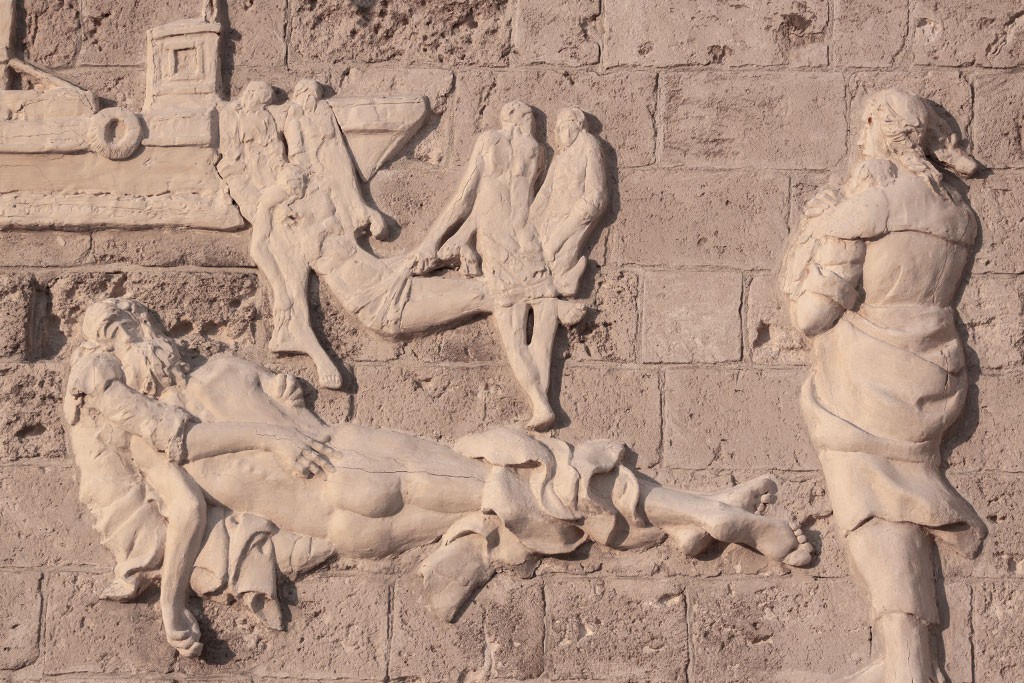 Walking around the port you will see an extraordinary bas-relief along the castle walls. These artistic stones tell the story of a tragic event which made headlines around the world. The tragic journey of the Greek ferry boat “Heleanna” and the rescue mission by the fishermen of Monopoli. The Heleanna was originally an oil tanker converted into a ferry boat for touristic needs. On 28th August 1971, 15 miles off the coast of Monopoli the tragedy occurred.

The Heleanna had left Patras (Greece) bound for Ancona with 1174 passengers (620 was the accepted limit) of various nationalities. A fire started in the kitchens due to a gas leak. The alarm was raised an hour later, the crew were unprepared, many poorly maintained life boats failed to descend, the life jackets were insufficient, panic and disorganisation ensued. The captain and his wife saved themselves in one of the lifeboats. The brave fishermen of Monopoli rushed to help after seeing the smoke and signals. The disaster resulted in 24 dead, 16 missing, 1089 survivors including 271 injured, 60 seriously. On 19th April 1972 the town of Monopoli, in recognition of their help and assistance during the tragedy of the Heleanna, was awarded the Medaglia Argento al Merito Civile (Silver Medal of Civil Merit) proposed to the President of Italy Giuseppe Saragat, conceded by the then president Giovanni Leone.

The citation read “The city with the highest level of civil duty and humane solidarity offered help and assistance with a true spirit of generosity for many days to the survivors”.

The Martinelli – Meo Evoli Palace Together with the castle this palace is undoubtedly the most photographed site of the port. This beautiful palace including the part which overlooks the “old port” was built in the 18th Century along the city walls (part of which are still intact). Built in Neo-Gothic style the loggia overlooking the sea has 8 pointed arches (the same as the entran...
The Castle of Monopoli It’s impossible to visit Monopoli without admiring its castle in the town’s historical centre. Of great architectural interest it was constructed in the 1500s on a promontory reaching into the sea, the fortress was part of the coastal fortifications decided by Charles V of Spain (followed by Don Pedro of Toledo). The manor house, of which the ea...
From cannons to bollards It’s necessary to go back in time to understand the port’s history. The town’s mayor, Baron Federico Indelli and municipal council decided to dedicate the construction to Queen Margherita of Savoia with its advantage to request “40 disused iron cannons to use as ships moorings”. To acquire the bollards 12,000 Lira was needed. The appointed Royal...
The typical Gozzo The Gozzo, unlike other traditional fishing boats with oars used locally in the 1600s and 1700s armed with lateen sails and whose length could reach 8 metres, was much smaller reaching a size of 3.5 to 4.8 metres. Some had masts with lateen sails, others used three or four oars. Fishermen used these for coastal fishing, the smaller “gozzo” (3.7 met...