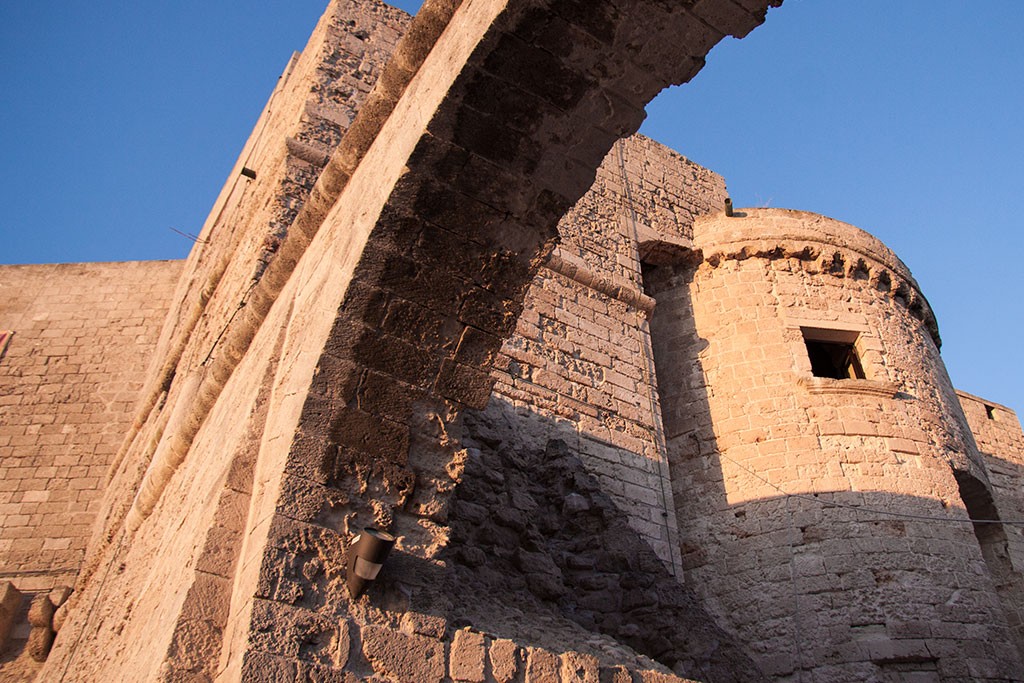 It’s impossible to visit Monopoli without admiring its castle in the town’s historical centre. Of great architectural interest it was constructed in the 1500s on a promontory reaching into the sea, the fortress was part of the coastal fortifications decided by Charles V of Spain (followed by Don Pedro of Toledo).

The manor house, of which the early works finished in 1552, included a pre-existing Roman shaped round tower and the ancient underground church of St Nicola de Pinna (11th Century) so called because it was erected on the point “pinna” of the promontory. The castle’s structure is the typical pentagonal shape of the 15th Century Spanish fortresses with two main floors: the quay level and the parade ground level and further mid levels used for various storage. From one of the courtyard rooms it is possible to detect part of the surrounding walls dating back from the 1400s.

The interesting parade ground allows viewing of the sentry’s walkway which connects the look-out towers on the north-east and south-east corners. Outside the castle the cannons and their high embrasures can be seen. The building underwent re-structuring in 1660 to accommodate Spanish military and their families. Originally the building was the residence of the city’s highest ranking military personnel but in the last century it became a prison. Since the recent refurbishment in 1998 the castle is used as a conference and exhibition centre. On the quay level there is a large and welcoming “armoury” with many artifacts linked to the maritime traditions.

The typical Gozzo The Gozzo, unlike other traditional fishing boats with oars used locally in the 1600s and 1700s armed with lateen sails and whose length could reach 8 metres, was much smaller reaching a size of 3.5 to 4.8 metres. Some had masts with lateen sails, others used three or four oars. Fishermen used these for coastal fishing, the smaller “gozzo” (3.7 met...
The “Old Port” – home of the “gozzi” The old port is the true home of the “vozz” – the dialect term for Gozzi, the typical local boats. They’re rowing boats about 3.5 to almost 5 metres long, usually painted an eye catching blue or red, with interesting names of fishermen, saints or the Madonna. Some still carry the ancient lampara lanterns. These local “works of art” made by “shipwri...
From cannons to bollards It’s necessary to go back in time to understand the port’s history. The town’s mayor, Baron Federico Indelli and municipal council decided to dedicate the construction to Queen Margherita of Savoia with its advantage to request “40 disused iron cannons to use as ships moorings”. To acquire the bollards 12,000 Lira was needed. The appointed Royal...
The Martinelli – Meo Evoli Palace Together with the castle this palace is undoubtedly the most photographed site of the port. This beautiful palace including the part which overlooks the “old port” was built in the 18th Century along the city walls (part of which are still intact). Built in Neo-Gothic style the loggia overlooking the sea has 8 pointed arches (the same as the entran...