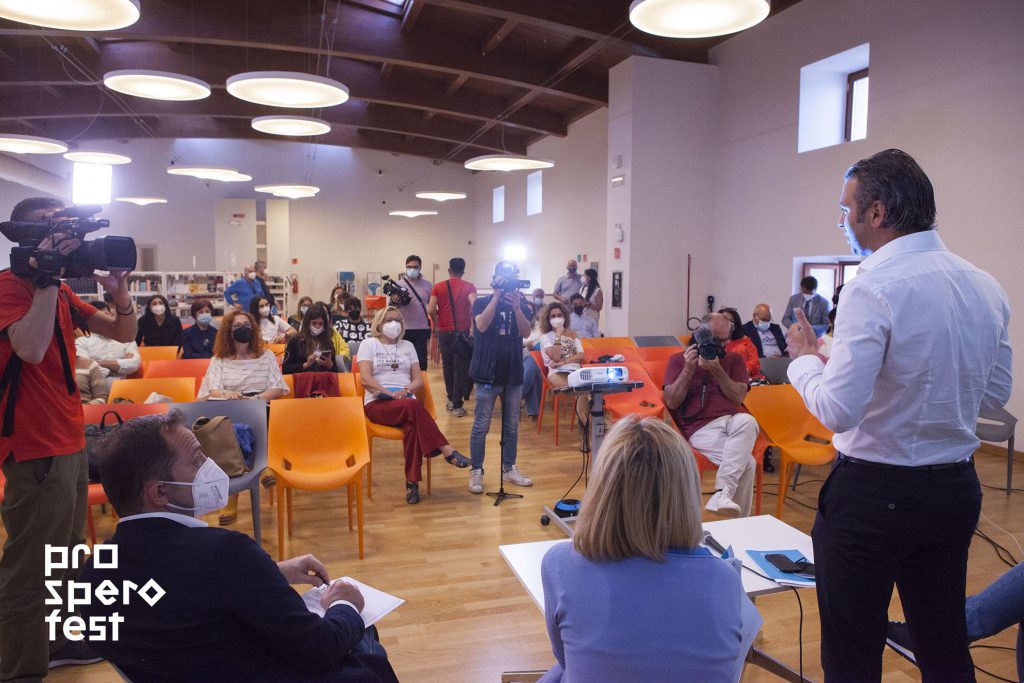 28 MayProspero Fest 2021: Authors, Ideas and Books at the Festival

Prospero Fest returns to Monopoli from June 12th to 18th. For the 2021 summer edition, which makes up for the 2020 edition that was suspended a few days before its start due to the pandemic, Prospero Fest boasts the collaboration of Nicola Lagioia, Director of the Turin International Book Fair who edited the section of “Le stagioni di Prospero “.

With two events a day, one at the “Prospero Rendella” Civic Library and the other at Piazza Palmieri, held in the presence of the public, in compliance with anti-Covid-19 measures and with restricted access, also available for streaming. Admission is free upon reservation (access without booking will be guaranteed only in the event of availability). All the events will be introduced by Journalist, Sergio Rizzo.

At the opening event on Saturday June 12th at 7 p.m. in the Rendella Library, Lawyer Francesco De Jaco will conduct the event with Diana Nicolazzo for the presentation of the novel “Il templare di Otranto. Il Mosaico” and “Il templare di Otranto. Outremer” (joined by Pierluigi del Giudice). In the evening at 9.00 p.m., after the institutional greetings of the Regional Councillor of Culture and Tourism Massimo Bray and the Mayor of Monopoli Angelo Annese, in Piazza Palmieri is scheduled the presentation of Paolo Crepet’s latest book entitled “Beyond the Storm. Come torneremo a stare insieme”, panelled by Alberto Maiale.

On Wednesday June 16th at 6 p.m., at Rendella Civic Library the presentation of Michele Carone’s first book “I fiori del male” (moderator: Felice Stama) will be held. Later in the evening, at 7.30 p.m., in Piazza Palmieri stages journalist Massimo Giletti in a function chaired by journalists Giancarlo Fiume (Editor-in-Chief of TgR Puglia) and Gianni Tanzariello (Editor of Canale 7) on the subject of “Investigative TV. The case of Non è L’Arena”.

On Thursday June 17th, two events of “Le Stagioni di Prospero” are scheduled: Antonella Lattanzi will be the guest at 7.00 p.m. in the Library with a meeting on the theme “On the novel: between chronicle and fiction”; at 9.00 p.m. in Piazza Palmieri Chiara Valerio gives a lecture entitled “Invisible and present. Where is mathematics every day?”.
On Friday June 18th at 7.00 p.m. the Rendella Library will host another event of “Le Stagioni di Prospero”: “Anime in pena. Cosa ci ha insegnato il vecchio Philip Marlowe” (Souls in pain. What old Philip Marlowe taught us) by Alessandro Robecchi; at 8.45 p.m. in Piazza Palmieri there will be a special award ceremony for Lorena Carbonara, winner of the Special Italian Women Award of the XVI National Literary Competition Mother Tongue dedicated to migrant women (or women of foreign origin) living in Italy or Italian women with the story “Ferma Zitella”. This will be followed at 9 p.m. by the presentation of Nicola Lagioia’s latest book “La città dei vivi” (hosted by Stefania Del Giglio).

“Postponed a few days before the start because of the pandemic, Prospero Fest returns to Monopoli at a different period than the first two editions, which were very successful and are part of the summer events of the City of Monopoli. After succeeding in winning the challenge of bringing cultural events in the middle of the autumn period, it comes back with a new look made of wider spaces, spacing and also streaming diffusion. From June 12th to 18th 2021 the “Prospero Rendella” Civic Library and Piazza Palmiere “Hosting two daily events with nationally renowned authors. We wanted to be there to give you a week of reflection and light-heartedness,” says the Mayor of Monopoli Angelo Annese.

“We made a virtue of necessity and were forced to postpone the 2020 edition of Prospero Fest due to the worsened pandemic, we took this opportunity to move the events already scheduled for summer, so that Monopoli will once again host authors and journalists on a journey full of emotions. We will do so in compliance with the anti-contagion rules, exploiting new technologies and even reaching the homes of those who cannot be physically present. I’d like to remember the event with “Le stagioni di Prospero” by Nicola Lagioia and the presence of authors such as Paolo Crepet and Federico Moccia and the participation of Luciano Garofano, Massimo Giletti and Tiziana Ferrario. It will be a week in which we will address a wide range of topics, from current affairs to fiction, with ample space dedicated to the public’s participation,” emphasises Culture Councillor Rosanna Perricci.

“Moving the edition scheduled for last November to June allows us to bring to the eve of summer an event that in 2018 and 2019 recorded significant numbers in November. It is our first major summer event and the line-up of authors, writers and journalists we will be hosting for seven days will elevate the cultural offer of this city and represent a further element that will act as a driving force for tourism, which has been severely limited by the pandemic over the last year,” says Tourism Councillor Cristian Iaia.

Torna il Premio “Il Gozzo” Il 16 luglio a Cala Batteria. Con Gianni Tanzariello, ospiti Monica Leofreddi e la Rimbamband La Puglia sorprende per la varietà di talenti e professionalità che operano sul territorio e non solo e che consentono alla regione di distinguersi in campi differenti. Per questo ogni anno a Monopoli, nel cuore della Puglia, si svolge il Premio “Il Goz...
PhEST 2022 – first advances PhEst – See Beyond the Sea, once again finds great success among those, who for study, hobby and work, have an interest in photography and art. This International Festival of photography and art takes place in Monopoli, starting from September 9 to November 1°. Conceived and overseen by Giovanni Troilo, in collaboration with curator Arianna R...
“Chiesa dello Spirito Santo”, Programm... The crypt of the Spirito Santo is one of Monopoli's must see sites. It’s an extraordinary example of hypogeum rock architecture that testifies to the carving skills of local workers, experts in quarrying. The era of its construction is doubtful and could be around the 12th-13th centuries AD: however despite its very ancient origins, the church is s...
PhEST: from the 6th of August to the 1st of Novemb... OUTDOOR AND MORE! From the 6th of August to the 1st of November 2021 in Monopoli, Puglia | The VI edition of PhEST – See Beyond the Sea The International Festival of Photography and Art is back   THE BODY   31 exhibitions of photography, contemporary art and street art A special project on the territory commissioned to Mustafa Sabbagh A ...