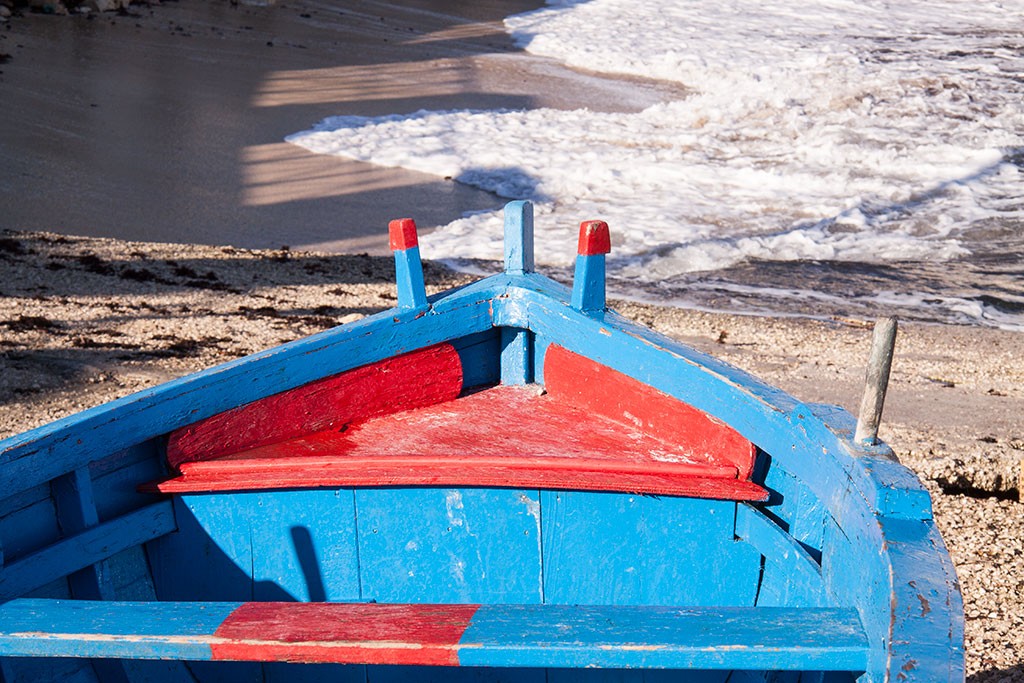 The Gozzo, unlike other traditional fishing boats with oars used locally in the 1600s and 1700s armed with lateen sails and whose length could reach 8 metres, was much smaller reaching a size of 3.5 to 4.8 metres. Some had masts with lateen sails, others used three or four oars. Fishermen used these for coastal fishing, the smaller “gozzo” (3.7 metres) were used in shallow waters catching “white” fish (sea bream, snapper, gilthead). The larger boats of 8 metres, colloquially called “big boat”, had no bridge or deck, only had a long horn mast for a lateen sail, four oars and a large rudder at the helm. These boats were made of local pine wood, whereas the keel and rib frame of oak. The planking was caulked by hand by local shipwright artisans then coated with a boiling hot pitch and tar mixture. This waterproofed and protected the vessel against shipworm, barnacles etc. Since the 70s the gozzo boats have begun to be motorised. Nowadays only the older fishermen use the original boats with oars. Their use is limited to nearby waters, the “Porta vecchia” cove or up to the “Diga di Tramontana”. They fish for octopus with “polpara” (a special fishing tool) or “bolentino” fishing for “u ciambott di chenl i cazzurrè”, a mixture of perch and rainbow wrasse fish.

The motorized gozzi boats fish along the southern coast as far as Capitolo and the Egnazia area where the sea is shallow in depth and rich in fish. They launch their trammel nets “a ntrumacchiet” or longline nets “u cuztidd” to catch various types of bream.

From cannons to bollards It’s necessary to go back in time to understand the port’s history. The town’s mayor, Baron Federico Indelli and municipal council decided to dedicate the construction to Queen Margherita of Savoia with its advantage to request “40 disused iron cannons to use as ships moorings”. To acquire the bollards 12,000 Lira was needed. The appointed Royal...
The Martinelli – Meo Evoli Palace Together with the castle this palace is undoubtedly the most photographed site of the port. This beautiful palace including the part which overlooks the “old port” was built in the 18th Century along the city walls (part of which are still intact). Built in Neo-Gothic style the loggia overlooking the sea has 8 pointed arches (the same as the entran...
The “Old Port” – home of the “gozzi” The old port is the true home of the “vozz” – the dialect term for Gozzi, the typical local boats. They’re rowing boats about 3.5 to almost 5 metres long, usually painted an eye catching blue or red, with interesting names of fishermen, saints or the Madonna. Some still carry the ancient lampara lanterns. These local “works of art” made by “shipwri...
Heleanna, pride of patriotism Walking around the port you will see an extraordinary bas-relief along the castle walls. These artistic stones tell the story of a tragic event which made headlines around the world. The tragic journey of the Greek ferry boat “Heleanna” and the rescue mission by the fishermen of Monopoli. The Heleanna was originally an oil tanker converted into a f...