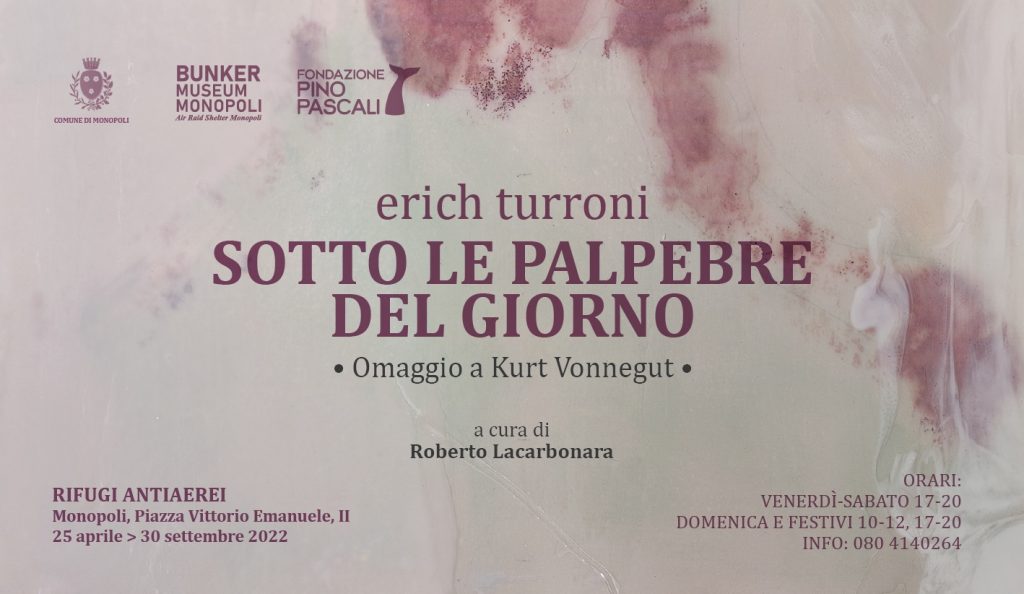 Sotto le palpebre del giorno (“Under the lids of the day” lit.) is a personal exhibition by Erich Turroni (Cesena, 1976), edited by Roberto Lacarbonara.

The event occurs for the Kurt Vonnegut (1922-2007) centennial, one of the greatest writers of the 20th century and author of “Slaughterhouse-Five, or the Children’s Crusade: A Duty-Dance with Death” (1969), considered among the major records of the atrocious WW2 events.

The exhibition is created and promoted by The Cultural Assessor’s office of Monopoli municipality with the support of “Pino Pascali Foundation” based in Polignano a Mare;

Housed in the city centre located Air-raid Shelters, it recalls the war feelings through

The author works resins and other synthetic materials to redefine the underground shelters spaces into a storage for bodies, fleshes and anatomic parts represented in the ghostly whiteness of the surfaces.

Ten sculptures and a gallery of large sanguine portraits fill the underground passageways and the old shelters infirmary; the shapes vaguely come out from diaphanous layers of fiberglass recalling intangible and imprinted presences, that feel and look like the rocks they emerge from.

The elements are unclear, rough-hewn, calcified in the harshness of the material but still able to take the observer into a surreal and dreamy dimension.

The exhibition sensitively honours the location history thanks to his great intensity; it is alternated with short excerpts from Kurt Vonnegut novel with the aim of narrating the history through the most clashing current issues.

Born in Cesena in 1976; lives and works in Gambettola (FC). His artistic research in the field of sculpture and painting is characterized by the use of materials and techniques of synthetic and industrial origin, from polyester to fiberglass and other plastics.

In 2007 creates the scenic elements of a play for the company “Motus” and in 2011 collaborates with the company “Teatro Valdoca”.

In 2008 takes part to the XV Quadriennale di Roma at Palazzo delle Esposizioni.

In 2021 is the guest of honour of the Phest | Festival photographic and contemporary art festival in Monopoli where exhibit a sculptural work located in the depth of the Cala Porta Vecchia sea.

Ritratti Music Festival – 18th edition Nine concerts in places of great charm in the name of kindness and beauty SOUNDS AND SPACES Music that builds bridges, invites to reflections and opens windows to the world with the inquisitive gaze of the curious explorer and the refined style of those who elaborate cultural relations beyond any boundary, through new and far-reaching project...
The “European Heritage Days” (EHD) are back Monopoli’s Cultural Assessor, Rosanna Perricci, will join the European Heritage Days (EHD) on Saturday 24/09 and Sunday 25/09, the biggest and most widespread cultural event in Europe. This edition topic is “Sustainable cultural heritage: a legacy for the future”, recalling the European slogan “Sustainable Heritage” chosen by the European Counci...
Inside Warhol. The exhibition from June 22nd at Ca... “Inside Andy Warhol” is coming!  An Apulian that holds an amazing history, is going to host a selection of original artworks, by one of the noble founders of contemporary art, and supported by video material, to offer a complete picture of Andy Warhol’s life and works (Pittsburgh, 6 August 1928 – New York, 22 February 1987). It is all about iden...
Monopoli All Year Round: All the Events Scheduled ... A calendar almost a year long. The "Prospero Rendella" Library this morning hosted the presentation of all the events that from February to December are part of the season of initiatives of the Municipality of Monopoli. With deliberation no.28 of 10 February 2022, the City Council of Monopoli has in fact approved the act of address for strategic ev...