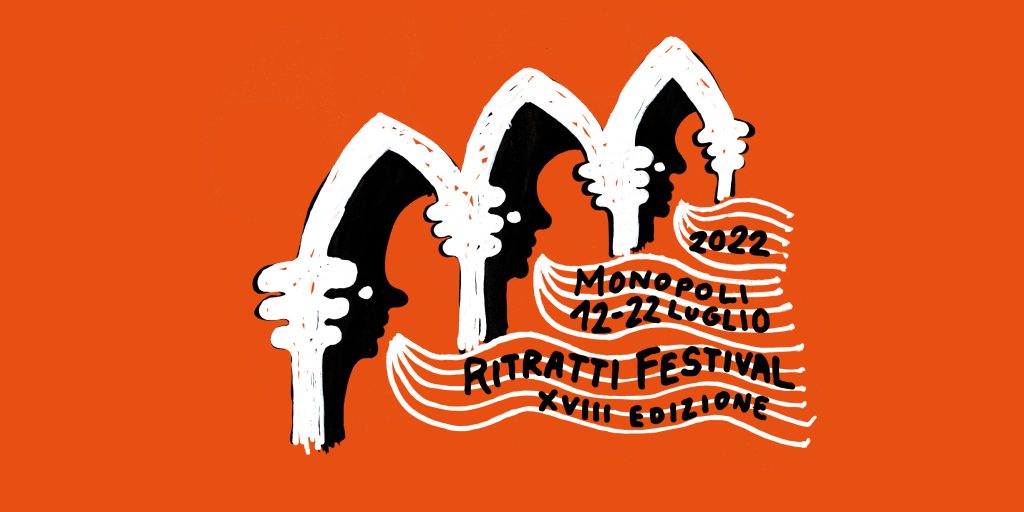 Music that builds bridges, invites to reflections and opens windows to the world with the inquisitive gaze of the curious explorer and the refined style of those who elaborate cultural relations beyond any boundary, through new and far-reaching projects. Characteristic signature of the Ritratti di Monopoli Festival since 2005, directed by Antonia Valente, who under the “motto” kindness has chosen to articulate the XVIII edition, filled with very different sound experiences, with the support of the Puglia Region and the Municipality of Monopoli, traditional partners of the event.

An excellence in the field of quality musical proposals and in one of the most popular tourist locations in the region: Ritratti will offer nine appointments, with absolute superstars of the international and italian scene, in a transversal path between languages. In the opening night, the Abbiati prize pianist awarded pianist, Emanuele Arciuli, in an American concert in memory of the composer Frederic Rzewski, who passed away last year, followed two days later by French “king of accordion” Richard Galliano, then dancer Elisa Barucchieri, Serena Brancale and Elio in a tribute to the great Enzo Jannacci, as well as workshops with children, an anti-mafia social action project and ALBA DI NOTE (sunrising-  concert on september 1st) 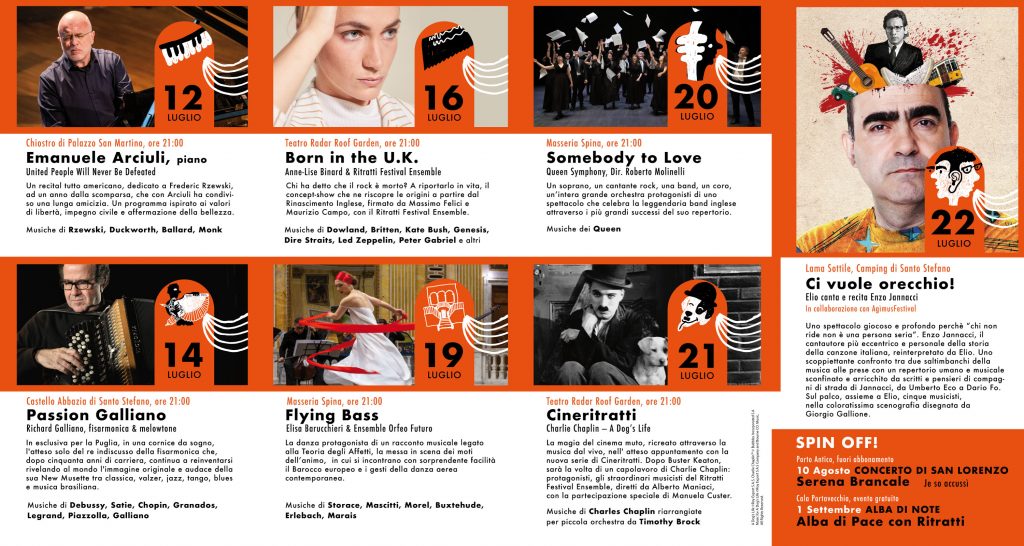 Starting on July 12 (9 pm), in the ancient beautiful cloister of Palazzo San Martino, with Emanuele Arciuli’s tribute to Frederic Rzewski inspired by the pacifist manifesto of the American musician: ”United People Will Never Be Defeated”. The concert, characterized by other expressions of American cultures eccentric to the mainstream (the natives Louis W Ballard and Connor Chee, the African Americans Margaret Bonds and Talib Rasul Hakim, and then William Duckworth, representative of post-minimalism), will follow the presentation of the book «VIAGGIO IN AMERICA – Coast to Coast Music »(Edizioni Curci), signed by Arciuli himself as an author, in a conversation with Alceste Ayroldi.

On July 14th (9 pm), in the Castello Abbazia di Santo Stefano,  the giant of the accordion and of the New Musette, Richard Galliano, will perform his only recital in Puglia in an iconic secret garden, two steps away from the sea water.

On July 16th (same time), Theater Radar Roof Garden, Ritratti helds the concept show “Born in the U.K.” on the great English music of every era, from the Elizabethan period to prog-rock: a project that sees together singer and violist Anne-Lise Binard and the electronic alchemists Gabriele Panico and Maurizio Campo together with the Ritratti Festival Ensemble led by Massimo Felici (guitars) including Pasquale Gadaleta (bass and double bass), Johnny Trombetta (keyboards) and the Apulian Cello Ensemble.

The next concert block will open on July 19 at Masseria Spina Resort, where baroque music will meet modern choreutics in “Flyng Bass”, in the co-work of dancer Elisa Barucchieri, founder of ResExtensa, and of the sounds produced by the baroque Consort Orfeo Futuro.

On July 20 (9 pm), once again at Masseria Spina, a tribute to the rock quartet of Freddie Mercury: with «Somebody to Love», The Queen Symphony, performed but a huge Symphony Orchestra and choir conducted by Roberto Molinelli.

On 21 July (9 pm), Ritratti gets back to the Radar Theatre Roof Garde with”Cineritratti” , the festivals section that includes a tribute to the silent film since last yeat: ”A Dog’s Life” by Charlie Chaplin will be brought back with sounds and live music by Ritratti Festival Ensemble, engaged in the performance of the original music restored by Timothy Brock. The nights features with a special opening number, mezzo-soprano Manuela Custer, where songs by Kurt Weill, Cole Porter, George Gerswhin and Chaplin himself are expected.

And from Chaplin we will pass to the italian «Buster Keaton of the song», on 22 July, to Lama Sottile (at 9 pm), where music and words by Enzo Jannacci will be remembered with the show «CI VUOLE ORECCHIO!” by pop superstar ELIO

On 10 August (9 pm), concert for the night of San Lorenzo with the singer Serena Brancale, invited to present her most recent album entitled «Je so accussì».

Then, on August 26, final concert of a two-month free workshop created within the Kids Festival section by Andrea Gargiulo in collaboration with Musica in Gioco and Happy Times, an anti-mafia social action project.

Closing event on September 1st, with an event in Cala Portavecchia to be held at the first light of the day: a “ALBA DI NOTE” with interactive environmental sound created by composer Gabriele Panico for vocal and electronic quartet.

“It will be great to see young talents together with internationally renowned artists: an opportunity – says the regional councilor delegated to Culture, Grazia Di Bari – to grow and offer to the many tourists in Monopoli a series of unique performances in their kind. I think it is very significant that this year the festival is itinerant in order to involve all the spaces of the city. Events like this are important for the entire cultural sector, severely tested by two years of pandemic. And I was pleasantly struck by the theme chosen this year, kindness, at a time when we risk being brutalized. Art must, on the other hand, represent a bridge of peace between peoples and a source of mutual cultural exchange and enrichment, exactly what the Ritratti Festival does, which the Region intends to support with all the other events scheduled in the coming weeks in every corner of Puglia. Those who come to visit us must know that they can admire not only our natural beauties and taste the food and wine delicacies, but also that they can count on a wide and varied cultural offer “.

The 2022 edition will be truly special. “This year – recalls the mayor Angelo Annese – Ritratti comes to the “major age”, 18. Eighteen editions have passed since the city linked its name to this event that has now become an unmissable appointment for summer events, with which Monopoli will host a series of appointments that make up a rich and prestigious calendar ».

And speaking of the enlargement of the geography of places, the city councilor for Culture, Rosanna Perricci, recalls the “different, new and very suggestive locations, in which the 2022 edition of Ritratti will be held, from the old port to the Theatre new Roof Garden, passing by Castle of Santo Stefano, Masseria Spina and the cloister of San Martino. An opportunity to discover and rediscover important treasures of our territory by attending concerts that enrich the cultural offer of Monopoli during the summer “.

With its high-profile programming, the festival therefore proposes itself as a reference point for the thousands of vacationers who will flock to Monopoli and the surrounding areas. “From this point of view – says the city councilor for tourism, Cristian Iaia – Ritratti represents an important and indispensable piece of our annual program of events. The appointment has, in fact, entered the tradition of Monopoli, especially in the months of July and August, thanks to its ability to expand and diversify the proposals. And I’m sure that the appointments scheduled in the coming weeks will be able to attract many fans ».

Therefore, Ritratti comes of age. “And this ideal entry into the adult world, we want to dedicate it to kindness as a revolutionary act and union between people”, says the artistic co-director Antonia Valente, adding that “always shaped and forged by her community, this year the festival will be for the first time itinerant to discover iconic places in the territory of Monopoli, a metaphorical port of welcome and hope».

“Chiesa dello Spirito Santo”, Programm... The crypt of the Spirito Santo is one of Monopoli's must see sites. It’s an extraordinary example of hypogeum rock architecture that testifies to the carving skills of local workers, experts in quarrying. The era of its construction is doubtful and could be around the 12th-13th centuries AD: however despite its very ancient origins, the church is s...
Ritratti Festival 2021 Monopoli resonates with the Ritratti Festival, XVII edition, a Festival that since 2005 has been bringinging music in the some of the most beautifil venues in Apulian Region. Starting on sunday, August 1, is the second part of 2021 scheduled program, with a new section called «Cineritratti». The musical kermesse will lead into a journey back to 19...
PhEST: from the 6th of August to the 1st of Novemb... OUTDOOR AND MORE! From the 6th of August to the 1st of November 2021 in Monopoli, Puglia | The VI edition of PhEST – See Beyond the Sea The International Festival of Photography and Art is back   THE BODY   31 exhibitions of photography, contemporary art and street art A special project on the territory commissioned to Mustafa Sabbagh A ...
Prospero Fest 2021: Authors, Ideas and Books at th... Prospero Fest returns to Monopoli from June 12th to 18th. For the 2021 summer edition, which makes up for the 2020 edition that was suspended a few days before its start due to the pandemic, Prospero Fest boasts the collaboration of Nicola Lagioia, Director of the Turin International Book Fair who edited the section of “Le stagioni di Prospero ". ...